Pop culture is sometimes absorbed almost by osmosis; you can be aware of something without having ever experienced it. For instance, I have never knowingly heard Let It Go. But I know what it is, from where it comes, and can “get” references to it. To my surprise, it seems the same goes for the original version of Ghostbusters. I’m not sure I had ever seen the film in its entirety before sitting down to watch it for the purposes of this review. I was certainly well aware of it, and there were chunks I definitely remembered. Yet there were also whole scenes, such as the one where the Ghostbusters are locked up in prison, which rang no bells at all. It’s quite possible I’d surfed randomly across it in fragments, without ever seeing it all, in the same way I still haven’t seen The Empire Strikes Back from beginning to end. 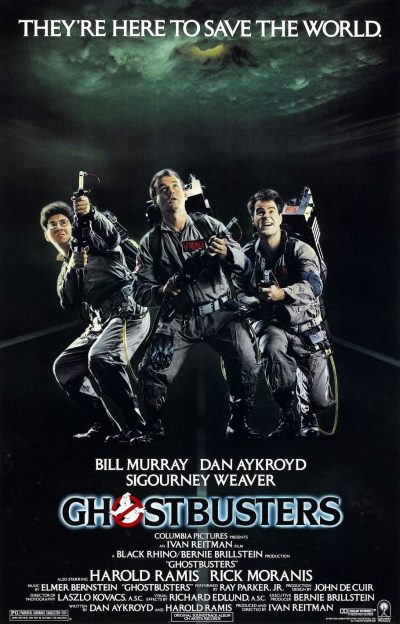 I could still have provided a fairly accurate summary of the plot. Paranormal researchers get tossed from their academic sanctuary, go into business privately and end up saving New York from a demonic entity in the shape of a giant marshmallow-man. I’m not sure whether that storyline is brilliance or stupidity, though the two are not mutually exclusive. As often, it’s the execution that matters, and in particular casting which is as near-perfect as dammit. The main dynamic has Ramis as super-serious scientist Egon Spengler, countered by Peter Venkman, a man who according to Dean Yeager seems “to regard science as some kind of dodge or hustle.” He is first seen blatantly fabricating results while using Zener cards to test subjects for ESP, telling a pretty girl she’s right even when she “sees” a symbol that’s not even in Zener cards (a figure eight, should you care). In terms of introducing the character, it’s perfect, and it’s the interaction between the pair, along with colleague Ray Stantz (Aykroyd), which drives the film.

This is not to say it all works. Venkman’s pursuit of Dana Barrett (Weaver), who ends up being key to the arrival of evil entity Gozer, is not very funny and feeks forced to the point of creepy, with the two having no chemistry at all. The fourth member of the group, Winston Zeddemore (Hudson) is basically irrelevant, and save for the Stay-Puft man, the special effects have not aged well at all. The pace also sags in the middle. It’s possible I may have forgotten the prison scene, because it comes during this slowdown, where the script seems to be meandering in circles and waiting for the Big Bad to show up. However, the film still manages to blend horror and comedy with skill, albeit skewed heavily toward the latter – for unsurprising reasons given the people involved. I don’t adore it as much as Chris, but this may be because it feels somewhat like a love letter to New York and its inhabitants, the city where she grew up.

There’s absolutely no denying its influence, and I was surprised to realize how many of the lines here have become absorbed into my unconscious – though perhaps it results from Chris’s casual use of them over the years. The net result is a film which I thoroughly enjoyed, has aged remarkably well, and Murray’s performance remains almost unmatched in both his career and the comedy genre. Yet it’s also one I will be happy to go back to catching randomly on television, seeing odd snippets, then surfing on, rather than being drawn in and putting down the remote.