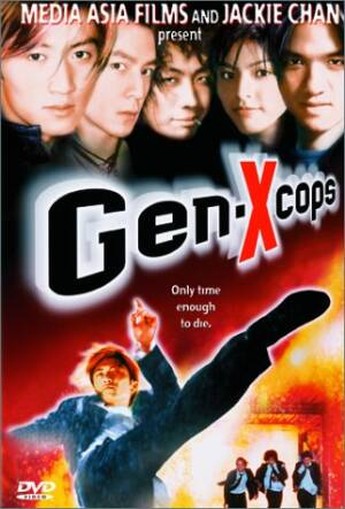 Live fast, die young, and leave an exceedingly well-lit corpse. That seems to be the motto in this HK take on The Mod Squad, pitting three wild, skydiving renegade cops against a Japanese gangster out for vengeance. A lot of the acting is awkward, no surprise given the hybrid mix of Japanese, Cantonese and English. Virtually every conversation has someone floundering, away from their mother tongue, and this does lead to plot obscurity, with character relationships often unclear. However, Eric Tsang, as their mentor (who may be mentally ill – another point of uncertainty), provides another sympathetic performance full of his trademark hang-dog expressions, and this helps paper over the significant cracks.

This is an action film though, and there are some striking stunts; the cast rarely used doubles, even when chased by giant fireballs or clambering out of burning swimming pools (seeing this in the making-of doc probably raised it from a C+). The martial arts are well-staged too, there’s miniature work, rare for an HK film and credit must be given for a soundtrack that steers very clear of the usual Cantopop squawking, favouring punk-techno that fits the characters admirably. Chan seems overly fond of smoke and blue light, especially at first, and it’s often almost shamefully Hollywood in style. Yet there’s still enough wild Hong Kong spirit present to lift it above most Western action pics of the past couple of years.