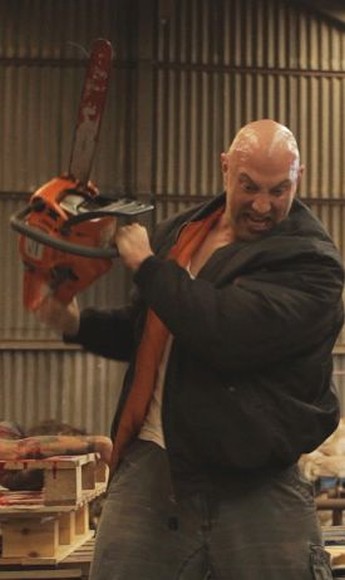 Clearly made by people who have seen both Shaun of the Dead and Snatch too many times, the no-name cast appears largely to be low-rent versions of recognizable names – this one’s trying to be Vinnie Jones, that one’s Ray Winstone, etc. Yet despite aiming so low this might shoot its own foot off, combining two of the most flogged to death genres of recent years, I couldn’t bring myself to hate this, as I probably should. After a bank robbery goes wrong, leaving them with a wounded participant, the gang of perps, led by Tony (Leaver, who actually was in Lock, Stock), try to handle the situation, only to discover society has its own problems. They gradually become aware of an escalating outbreak of flesh-munching, and bail out of the city, getaway driver Q (Jerome) at the wheel, aiming for the coast and a boat to the continent. On the way, they get stuck in a windmill owned by Cassie (Orhan) and her grandmother, and loyalties becomes tested as they try to figure out where to go from here.

As long as you go in with reasonable expectations, wanting no more than a tongue-in-cheek and very cheap zombie film – what the director called, “a shoestring budget that was cut in half and set on fire” – this is decent enough. The most interesting aspect is likely the first half, when the gang are driving round an eerily-deserted London [that’s very nicely captured] in their van. It’s both claustrophobic and novel, and the banter between them is occasionally spot-on, though could also have done with tightening up on occasion. After they go under siege in the windmill, it does become something that’s both all too familiar, and has been done much better elsewhere: like a shark, this is a story which needed to keep moving forward to survive, and it all but grinds to a halt here, as the director unwisely tries to shoehorn a romantic element into proceedings. However, there are still enough amusingly deadpan moments the rest of the way to allow the film to coast over the finish line, e.g. Muscles (Charlie Rawes) admitting his promised knowledge of sailing comes from a computer game which was free with a magazine. As a genre mash-up, it falls well short of its inspirations, yet if you allow for the limited resources, is a respectable effort.