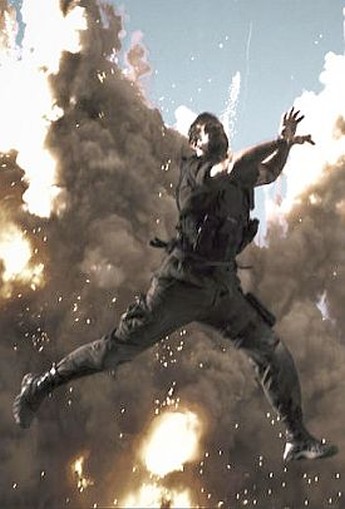 A little way in the future, online gaming has entered the next generation: players control real people. Initially, it’s “pay-for-play” volunteers who act as the avatars, in a Sims-like world, having been injected with nanotechnology to allow them to be controlled remotely. But creator Ken Castle (Hall) ups the ante with his next game: Slayers, in which death-row convicts battle it out, with the promise that if they can survive 30 sessions, they will get a pardon. No-one has managed it so far, but John ‘Kable’ Tillman (Butler) is approaching the mark, under the control of his gamer, Simon (Lerman), but during his 30th match, escapes the arena, having been told by the rebel Humanz group that Castle plans to kill him. He joins up with the Humanz and sets out to rescue his wife and daughter from Castle’s lair, where he discovers the true nature of the entrepreneur’s plans for humanity.

Despite crashing spectacularly at the box-office, I was impressed by this for its unrepentant, balls-to-the-wall depiction of the future. The New York Times called the movie “a futuristic vomitorium of bosoms and bullets,” and I can’t argue with them there, though they use the phrase much less enthusiastically than I would. How you react to the film likely depends on whether it is a description which repels you, or has you running for the DVD. I think the problem is perhaps that those most likely to “get” it, were too young to get in to see its sex and violence-fuelled excesses. And it’s not exactly a flattering portrayal of gamers, either, with the two characters shown being a rich brats and an obese, basement-dwelling pervert. I’m probably rare, in that I’m very aware of online-gaming (son in his twenties, and I work for a web-hosting company – how could it be otherwise?), but don’t take part in it to any significant degree.

It’s a fair comment that many of the themes – violence as entertainment, dehumanization in the online world – have been covered before. However, those were usually po-faced efforts that failed to depict, in any meaningful way, the adrenalin-fuelled buzz which is the seductive lure behind these themes, so seemed to be trying to play both sides of the coin e.g. “violence as entertainment is bad; and to prove it, here’s some more.” Neveldine & Taylor do a better job of balance, and while the film could hardly be described as thought-provoking (it doesn’t pause long enough for that), you may find elements lingering after its over, to a greater degree than its allegedly more-intellectual siblings. Certainly, no film has done a better job of capturing the fractured, frenetic, lurid, sordid and surreal atmosphere of life careering down the information superhighway, and the directors of Crank are the ideal boys to embrace and capture it, while also pointing out the potential dystopia.