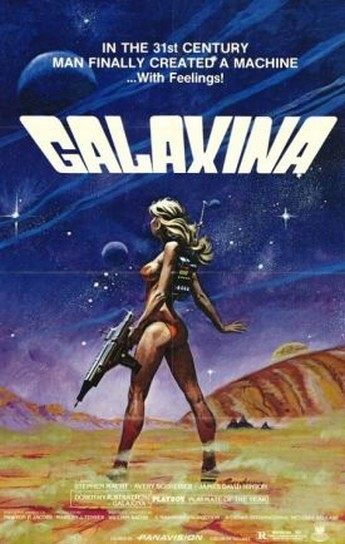 In the 31st century, the bored and largely incompetent police crew of space-cruiser Infinity, are on patrol, when they are diverted to prison planet Altair One, and order to stop a powerful gemstone, the Blue Star, from falling into the wrong hands. Due to an unfortunate case of whiplash affecting all the human members on board, it’s up to the ship’s android, Galaxina (Stratten), to go onto the planet, brave the cannibalistic locals, liberate the Blue Star from its current owner, escape the clutches of a motorcycle worshipping cargo cult and get back safely. Fortunately, she has the help of brave Sgt. Thor (Macht), who has fallen for the shapely cyborg: she spent the 27 years trip to Altair One, while the rest of the crew were in cryogenic sleep, re-programming herself to speak. Because her makers didn’t bother with that. Breasts, yes; speech, not so much. Good to see the 31st century has become such a progressive place.

In case the above is in any way unclear, this is not intended to be taken seriously at all. The vibe is heavily influenced by Dark Star, emphasizing the mind-numbing tedium of interstellar travel, but this 1980 film also spoofs both Alien and Star Wars. The former is apparent in lines such as, “In space, no one can hear… your siren,” as well as the subplot where Captain Cornelius Butt (Schreiber, shamelessly channeling Rip Torn), it would appear) eats an extra-terrestrial eggs and barfs up an alien critter on the mess table. The latter has an opening shot of the ship cruising over the camera, a couple of parodies of the Mos Eisley cantina sequence (one in a brothel on an asteroid!), and perhaps also the “space battles” which consist of the craft in question sitting at point-blank range, firing at each other until somebody’s shields give up.

I laughed at this a good deal more than I expected. Actually, I’d say this was significantly better than Spaceballs, which it preceded by seven years. Sure, this is likely dumber, and certainly cheaper – though it certainly benefits from being shot by John Carpenter’s regular cinematographer, Dean Cundey, who did The Thing and Halloween). But I actually laughed out loud on a number of occasions, and was always entertained. Something of a surprise that Playboy playmate Stratten keeps her clothes on in her feature debut: must be about the only one ever to do that. Infamously, she was murdered less than two months after this came out, by her estranged husband, adding a certain poignancy here. Still, if the nudity is restrained, don’t make the mistake of thinking this is suitable for kids, with swearing, drug use and a general poor attitude. Makes it all the better, I’d say…