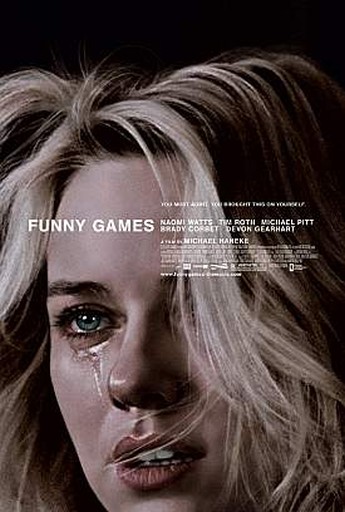 I remember seeing the original Austrian film a decade ago, but don’t recall much of the details. However, this basically appears to be exactly the same, almost shot-for-shot, but in English and with better-known actors. The scenario is certainly exactly the same: a husband and wife (Roth and Watts), together with their son, find their country home invaded by a pair of excruciatingly-polite young men (Pitt and Corbet), who proceed to engage in a series of sadistic games and tortures of the family, for no readily apparent reason at all. The set-up makes it seem like a horror movie, but Haneke very deliberately avoids the usual structure and style of such things, with almost all the violence taking place off-screen rather than being the focus [and, indeed the raison d’etre in some cases]. In one scene, for example, the camera follows an intruder as he goes to the kitchen to get a snack. We only hear what’s going on in the living-room, though it’s no less disturbing for that.

This both works for and against the film: expectations are continually confounded, with the fourth wall being broken repeatedly. Yet, it’s also apparent that the conventions of the horror movie are so familiar because they are effective; when you strip them away what’s left can be remarkably tedious and tension-free on occasion. Seeing the wife, bound hand and foot, struggle to get to her feet and painstakingly make her way to the kitchen, is not great cinema. This may be entirely deliberate on Haneke’s part, since apparently the last thing he wants to make, is an adrenaline fuelled thrill-ride. However, the pretensions also defuse the intent: when one of the psychopaths asks us, the audience, “Think they stand a chance?”, it implicates the viewer in what’s going on, yet also breaks the suspension of disbelief, proving it’s only a movie. Haneke is apparently unwilling to acknowledge this core difference: enjoying violence when you know it isn’t real is a completely different thing. Still, credit to him for an attempt to ask interesting questions, even if the answers he provides are not necessarily accurate.