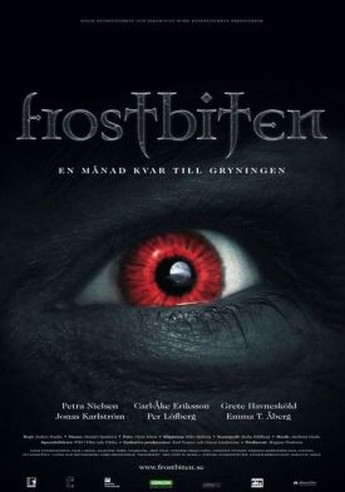 On the Eastern front in World War 2, a group of soldiers stumble across an apparently deserted cabin, which actually conceals something – or things – very nasty in the cellar. Back in modern-day Sweden, Annika (Nielsen) and her teenage daughter Saga (Havnesköld) arrive in a Northern town, where Annika has a new job, with famous geneticist Gerhard Becker (Eriksson). However, it turns out that Becker is actually a survivor of the platoon, and a vampire himself, now conducting research with the aim of creating a new superspecies. Unfortunately, some of the drugs he’s using – which have some rather unusual side-effects – are stolen by hospital worker Sebastian (Karlström), and eventually make their way to a party where Saga is making friends with the local kids. Sebastian is, unsurprisingly, ill-equipped for what’s about to happen to him, and the local authorities are no better prepared.

While the scenario may be a little too obvious if you’ve see 30 Days of Night (this pre-dates the film, but post-dates the comic book which inspired it, though this was apparently in preparation for most of a decade), the bulk of this works quite well, as a nice mix of horror and comedy, Banke tying together the multiple disparate threads together with skill. I think our favourite was probably Sebastian having to go round for dinner at his girlfriend’s parents, which turns out to be about the worst of all possible scenarios for a proto-vampire: for instance, her father is a minister and, naturally, there’s garlic on the menu. The main problem is the film doesn’t go anywhere truly satisfying; while things are set up as if they’re going to build to something spectactular, there’s little or no payoff, and you end up with a sense of vague disappointment, and “Is that it?” The earlier, more inventive and witty ideas may stick in your mind much more than the later efforts. I mean, who knew garden gnomes were effective against vampires?