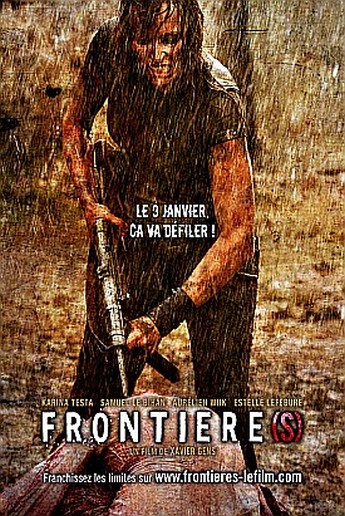 The older I get, the less inclined I am to believe drooling fan-boy hype about horror films, from people who apparently think Eli Roth is a god among directors [no reflection intended on Roth who, by what I’ve heard, is a nice enough guy]. So, when “Mr. Disgusting” of Bloody-Disgusting.com writes, “Guaranteed to knock you on our ass so hard that you’ll be bruised by it for life, leaving a little scar deep inside you. This film will not be easily forgotten or shaken off, I guarantee this is one for the ages… you are about to enter a new frontier of horror,” it sets off all manner of alarm bells. Let’s just go through that, shall we. Bruised by it for life? Only if you’re a spineless pussy. One for the ages? Hardly. It’s as if Mr. D has forgotten the past 35 years, since Texas Chainsaw Massacre first took a bunch of unsympathetic, young jerks [in this case, thugs who have no hesitation opening fire on cops], drove them out to the country and trapped them in a remote house with a very strange, psychopathic family. That’s what we have. The subtitles don’t make it any less a retread, even of ground seen recently in Hostel, the Hills Have Eyes remakes or Wolf Creek.

That said, the execution is smooth enough and there are some nice angles – the family are ruled over by an unrepentant Nazi, though Gens’ efforts at adding political depth to torture-porn are, frankly, embarrassing. [I look forward to Michael Moore including dismemberment by buzz-saw in his next left-wing polemic, as a reciprocal nod to Gens] Still, he delivers a relentlessly downbeat tone with impressive evenness, even if the characters are, mostly, no better drawn than the victims in less-heralded efforts, such as the Saw series. The main exception is Testa as Yasmine, who doesn’t let pregnancy get in the way of her survival by any means necessary. Once the film has disposed of the minor characters and settles down to Yasmine vs. inbred Nazis, things have a no-holds barred attitude that kicks ass in a variety of spectacular ways. In the end, this comes down to managing expectations. Go in, knowing this is leftovers from the last three decades of genre cinema, and you’ll have a fine time, for Gens has re-heated them with some flair. But “A new frontier of horror”? Oh, hold my aching sides, for I fear they may split.