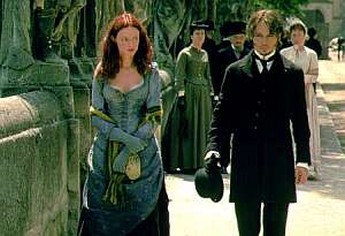 Things the movies teach us, #183: 19th-century Whitechapel whores often had perfect make-up, hair and teeth – the only dodgy thing about them is their accent. Certainly, Heather Graham’s wild inauthenticity does a lot to destroy what looks like a lot of effort, at creating the period atmosphere. Not the least active there is Johnny Depp, who manages to turn in a good performance, despite looking disturbingly like Dave Gahan (complete with a similar chemical abuse problem). His detective is tracking down Jack the Ripper, aided by opium-induced visions and Robbie Coltrane’s sarcastic sergeant.

To anyone with the slightest interest in Ripper mythology, there’s precious little suspense here, as it’s established quite early what theory this one backs. Still, Depp commands attention well, and the rigid class structure of Victorian society is mercilessly shown. If you don’t see the ending (in which Renault girl Estelle Skornik has a hand) coming, I’d recommend you stay out of even the most well-lit back alley. On the other hand, such myopia might lessen the pain, since it is largely unsatisfying. I’m certainly encouraged to track down Alan Moore’s graphic novel, albeit partly in the hope it ties things up a good bit better.