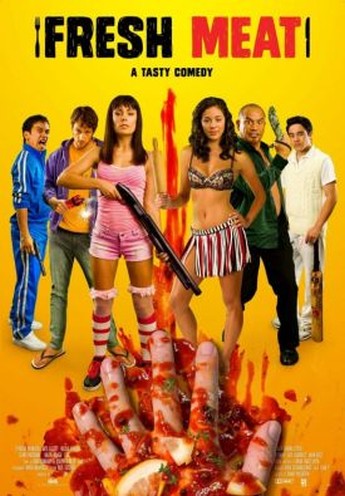 Random factoid. Director Mulheron played Heidi the Hippo in Peter Jackson’s Meet the Feebles. Who knew… This is a little different, obviously, but does have a quirky sense of bizarre excess which is not dissimilar. The central character is Rina Crane (Tevita), who heads home from school to be with her family, only for them to be invaded by the Tan brothers and their cronies, who have just broken Richie Tan out of jail and need somewhere to hole up. However, that’s not even the strangest thing that happens to Rina on the day. She also discovers that her Dad (Morrison) is the high priest of a religious cult, and has converted the rest of the family to cannibalism. Looks like the outlaws might have bitten off more than they can chew (hohoho), and that invitation to stay for dinner taken on a rather different meaning…

There’s nothing wrong with films which start off as one thing, then shift in another direction – From Dusk Till Dawn did it magnificently. But this one never quite seems to decide what it wants to be, shuffling uncomfortably from horror to thriller to comedy to lesbian soft-porn, apparently unable to commit wholeheartedly to any of them. The net result is, it doesn’t succeed, though that may also partly be down to too much reliance on local culture. Maybe some white teenage guy pretending to be in tune with his Maori roots gets them rolling in the aisles in Auckland: in Phoenix, less so. There is a certain energy on view, and all the cast (notably Elliot as the badass, shotgun-wielding villainness) go at the content with enthusiasm that helps pass the time. But it never settles on one approach long enough to sink its teeth in, and that reduces the resulting impact to slight at best. It’s much more of a snack than a main course, and you’ll probably leave unsated. Is that enough food-related criticism?