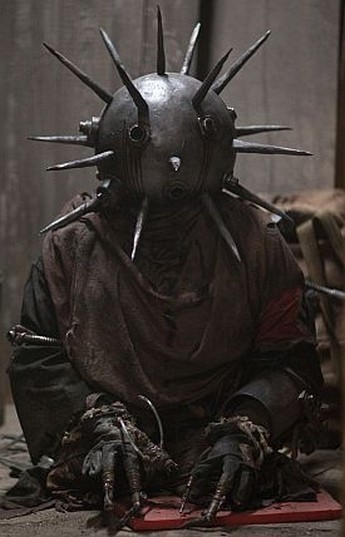 In World War 2, a Soviet reconnaissance patrol detects a radio transmission from a group of colleagues, requesting help. On their way to the signal’s source, they find unsettling hints that something is afoot: opened graves and a man, wired into an electrical grid and bearing signs of surgery, who attacks them when the power is turned on. However, it’s only on reaching their destination, that they discover the true horror and their goal. Victor Frankenstein (Roden) is continuing the work of his family, on behalf of the Nazis, and fabricating soldiers through a combination of body parts from the dead and mechanics, outfitting his creations with outlandish weapons and armour. He unleashes them on the Russian posse, who face a stiff task of surviving the onslaught.

I wanted to like this much more than I did. It’s certainly inventive, and some of the monsters on display are fabulous. However, it’s another entry in the “found footage” genre, being told from the story of the photographer (Mercury) documenting the patrol’s progress. This is a pointless conceit that’s even more implausible than usual – trust me, you’d be dropping the camera after the first encounter – and out-stays its welcome after about five minutes in, sending Chris running as her kinetosis kicked in [don’t even get me started on how his handheld camera is apparently capable of recording colour with sync’d sound in the early forties!]. It also needs a better sense of progression: they could have drip fed us increasingly bizarre monsters over the first hour, rather than going from nought to all of them in about five minutes. It’s a pretty amazing five minutes, admittedly; however, balance them with the remaining 80, which are a mediocre mix of war and mad scientist movies, and the overall results aren’t particularly worth the effort.