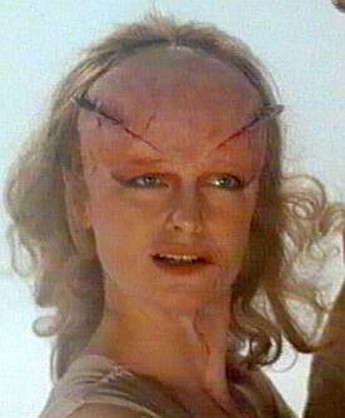 [7] Based on the book by Brian Aldiss, in which Dr. Buchanan (Hurt) is sent back in time to 19th century Switzerland, where Byron, Shelley & Mary Godwin are having their notorious party on the shores of Lake Geneva, and Something is killing local livestock and people. It will come as no surprise to learn of the presence of a Dr.Frankenstein (Julia)… It’s typical Corman hokum, enjoyable in a mindless way, but every time it starts getting momentum going, it manages to screw things up – the worst case of this is having Michael Hutchence, lead singer of INXS and Kylie’s ‘friend’, (sorry, Cathy!) playing Shelley. The audience found him highly amusing. Large amounts of picturesque pseudo-Swiss scenery (it was shot in Italy) give it a slight travelogue air – overall, it just about works thanks to some nice touches on the monster and imaginative use of optical effects.