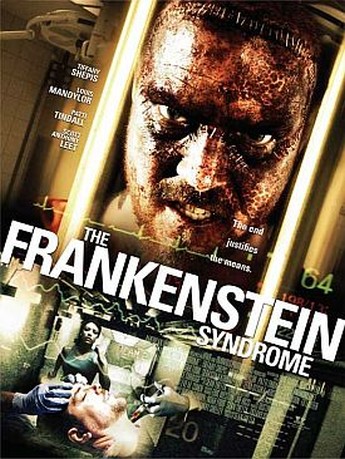 Dr. Elizabeth Barnes (Shepis) joins a project looking into genetic modifications, with the hope of making a universal “healing serum.” It’s on the cutting edge of medical knowledge, and even further out there in terms of the medical ethics involved, which are dubious at best – witness the harem of egg-doning women kept shut up in the facility basement. After some dead ends (hohoho!) along the way, and a good deal of bickering between Barnes and project head Dr. Victoria Travelle (Tindall), they seem to come up with a working serum, and they test it out on David (Leet), a security guard at the complex, who tried to blackmail those in charge of the project and was put down with a bullet in the brain as a result. He comes back to life, albeit with no knowledge of any human skills…at least initially. As he continue to heal, it becomes clear that David is learning at a prodigious rate, and also developing additional skills that he never had in his previous incarnation. Indeed, these now include things like telekinesis, which aren’t supposedly part of any normal human spectrum.

Shepis is not exactly the first name that comes to mind when you think of actresses who can play characters with a doctorate in molecular biology, yet she delivers some hefty chunks of technobabble with confidence, which helps sell the concepts here. Still, it would have benefited from someone like Jeffrey Combs, especially early on, when the storyline seems to be following the traditional “mad doctor” line, with little in the way of variation to keep your interest. The progression of David into a near-divine figure, however, is a fascinating concept, which takes the original concept of Mary Shelley’s story and pushes it in some interesting directions, almost to Flowers for Algernon territory. Shame it took so long to get there, as the philosophical, moral and even religious implications of this would certainly have been worth deeper scrutiny. Too soon, the obligatory “amok” sequence is reached, David going on the rampage, because he’s a monster and that’s what monsters do, destroy their creator, etc. Where’s a mob with torches when you need one?