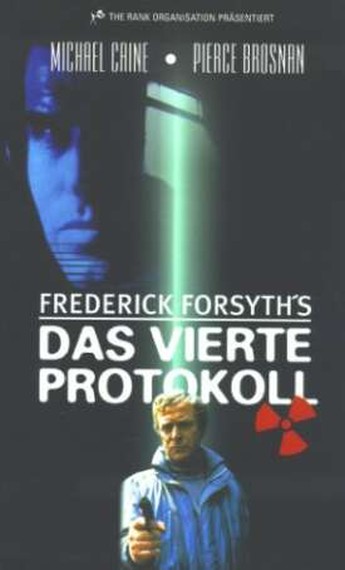 It’s Harry Palmer vs. 007! Or so it seems, though Brosnan was eight years short of becoming Bond, and Caine twenty past Palmer, when they respectively played a Soviet spy bent on detonating a nuclear device on a US airbase, and the British agent out to stop him. The two decades in age-difference does render the climactic fist-fight between them a bit doubtful, but the moments when this film does best are between the action: Brosnan’s cold-hearted lethality, Caine’s cheery disregard for protocol, and the marvellous political shenanigans that reduce everyone to pawns.

From fifteen-plus years later, the film comes across as a real period piece. Set at the tail-end of the Cold War, amid CND protests, check out some severely primitive mobile phones and tracking technology. It’s less successful in putting over the mechanics of the chase; the Russian’s supposedly top agent doesn’t come across as that, despite an undeniably ruthless streak. There’s also some stuff with Caine’s family which is more irritating than endearing, but on the whole, this is a solid thriller providing you don’t expect much in the way of guns, girls and gadgets. And it’s worth it, simply to see the likes of Glover, Michael Gough and Iain Richardson jockeying viciously for career position, while smiling like sharks.