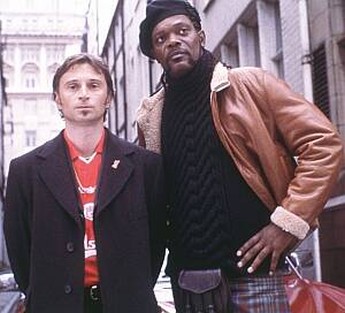 American chemist McIlroy (Jackson) invents ultimate high. Goes to Liverpool to try and sell it. All hell breaks loose. There. That’s the plot out of the way. While this has odd bits of potential peeking out, too many points are left waving in the breeze, such as McIlroy’s fondness for golf and kilts. If you’re going to put this kind of stuff in a movie, it needs to be for some real purpose, not simply in lieu of character development. The film also makes an attempt on the record for most uses of “Fuck”, though given the heavy accents, there are times when its hard to be sure, and god knows what American audiences made of them, or the numerous footie references.

The script for this is really little beyond a mess, and Yu’s grandstand direction, while inventive, only confuses things more. Carlyle, as Felix DeSouza, the local connection, is simply unlikeable, but hitwoman Dakota (Mortimer) shows more depth and potential, a Scouse lass turned assassin in order to work off her gambling debt. Hard to see why they chose to set it in the Northwest at all; while I suppose it makes a change from another Cockney caper, it could be any city north of Watford with a football team. Still, largely inoffensive, and perhaps worth sitting through, simply for the amazing manner in which the villain is dispatched at the end. The moral of the story is, piss off criminally-inclined pharmacologists at your own risk…