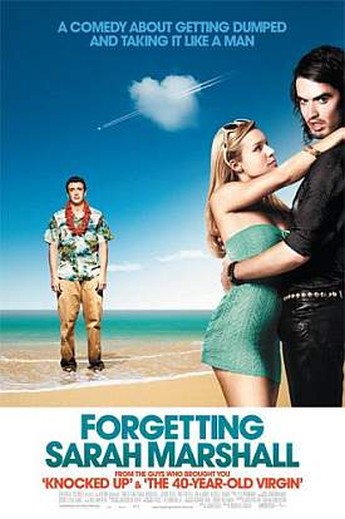 “It’s not a chick flick,” insisted Chris as she lured me in to watch this. I beg to differ. While the protagonist may be male, and it’s got more raunch than the usual oestregen-fuelled drama, it is, in the long run about relationships. The central character, composer Peter Bretter (Segel) spends so much time agonizing and, literally, weeping about the loss of his girlfriend, the titular actress (Bell), that one fears he may be developing breasts [I’m never been through that side of a break-up, but like to think I would have some balls]. Having found that shallow and meaningless sex is only a temporary solution, he heads off to Hawaii to recuperate with a change of scenery, only to find that Sarah and new rock-star boyfriend Aldous Snow (Brand) are staying there too. However, he hits it off with the hotel receptionist, Rachel (Kunis), who appreciates his plight and does what she can to soothe Peter’s pain as he tries, alternately, to make up with Sarah and obliterate her from his memory.

But it’s an uneasy blend of chick flick and raunch, with Segel delivering more nudity than the women – another factor that makes me wonder whether the target audience is lad or ladette? It doesn’t help that the men are idiots: Chris tended to the view that this was true for all the characters, of both sexes, but I’d say Snow and Bretter are the butt of most of the jabs – Marshall is shallow, but likeable, while Rachel is easily the most sympathetic person in the whole film. It works better as a comedy than a romance, with Brand perhaps coming off best: he is a total rogue, so upfront about his promiscuity, it’s almost an endearing trait. There are also some jabs at TV and movies, but the best moment is the end, where Bretter gets to stage his long-delayed musical version of Dracula. It’s not what you’d expect at all, and is a good deal more entertaining than the rest of the film.