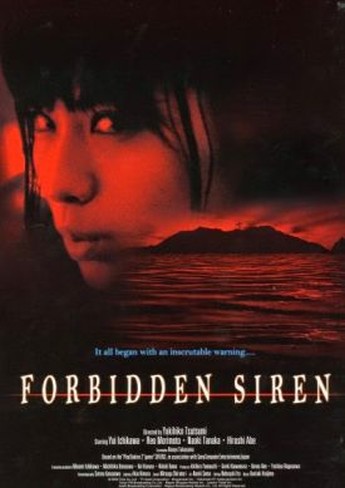 Seeking a cure for her kid brother Hideo (Nishiyama), Yuki (Ichikawa) travels to a remote island with her father, novelist Shinichi Amamoto (Morimoto). As soon as they arrive, the strangeness of the place is apparent: it plays like a Japanese variant of The Wicker Man, and the audience already knows it was the location of an incident in 1976, when the entire population vanished during a storm, except for one man. He was found in a chair, gibbering like a loon about the siren which overlooks the island, a leftover remnant from the American occupation. Since then, local folklore warns against going outside when the siren can be heard, as Yuki learns from the doctor, Yutaka Minamida (Tanaka). The weirdness continues to escalate, until Shinichi vanishes during a storm – and, when he eventually shows up, he is… different.

A good deal of how you’ll feel about this will depend on what you think of the ending, which I’ve seen described in more places than one as a cheat that devalues the rest of the movie. While hard to review without spoilering, I’m not yet convinced that’s the case – I’d likely have to watch it again to see if it “made sense.” Certainly, I didn’t feel cheated, the film perhaps having built up enough goodwill during the rest of its running-time, that any disappointment over the ending was more than countered. This is mostly because of the relentless sense of menace built up in the early stages: there’s hardly a scene which isn’t designed to make the viewer feel creeped-out, in some way or other, to the point where you’re screaming “GET OFF THE ISLAND!” at Yuki. That she doesn’t, I feel actually makes more sense in light of the ending.

I wasn’t aware until post-viewing that this was actually based on a video-game; as such, it has to be considered one of the more successful adaptations, at least for someone like me, who has never played the inspiration. For it delivers atmosphere by the bucket-load, and to me, this (along with the thumpingly catchy techno song behind the end credits!) was sufficient to outweigh potential issues with the script.