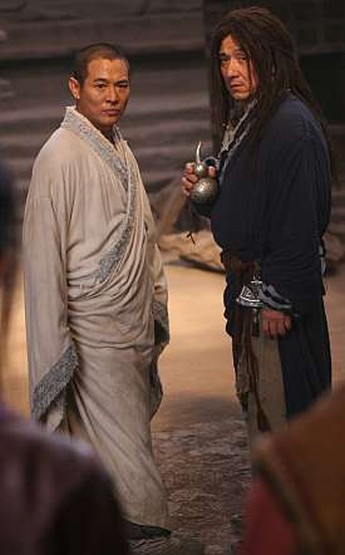 Surprising it took so long for the two biggest names in martial arts, post-Bruce, to get together; after all, they’ve been top of the heap for the past 20 years. Perhaps even odder, it was Hollywood that paired them up, not Hong Kong. Still, despite the obvious nods to the West – most obviously the largely pointless casting of Angarano as the young hero, the token gwailo in the cast – this is entertaining fluff, with the Li-Chan battle when they first meet, certainly living up to expectations. Jason (Angarano) is transported back to ancient China, courtesy of a staff from a pawn-shop, which he haunts looking for martial-arts DVDs. For Jason is a kung-fu fanatic, which certainly makes him better suited to the abrupt change of scenery from Boston, though his fighting skills are notable by their absence. This makes his task – delivering the staff to Five Elements Mountain, to free the Monkey King (Li) and his spectacular sideburns from his current position as a garden ornament for the Jade Warlod (Chou) – all the more perilous. However, he’s helped by the immortal Lu Yan (Chan) and the Silent Monk (also Li). Cue the training montages.

Minkoff is better known for co-directing The Lion King than any martial arts work, and in this area it seems he did the wise thing. That would mostly be, point the camera at the actors, leave it there, and let action choreographer Yuen Wo Ping do his thing. Only at the very end, where Minkoff decides to throw multiple fights at us simultaneously, with inevitably-disjointed results, does the film lack the fluidity essential for the audience to appreciate martial skill. There’s also something a little wrong with the Monkey King’s battles: it’s hard to explain, but conservation of momentum seems off somehow, as people whizz off through the air at the slightest tap from him. Still, a couple of cool supporting action heroines, and a nicely self-effacing performance from Chan, are bonuses that help the time to pass smoothly, even when it’s clear that English is a second language for most of the central characters. While we will never see JC plummet from clock-towers again, and even though wire-work and other enhancements are now his stock in trade, it’s amazing to think that, at the time of writing, Jackie is now nearer sixty than fifty. There’s life in the old dog yet.