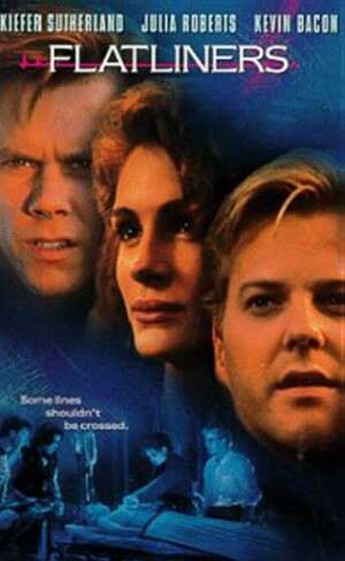 When people tear into Joel Schumacher, this is probably the kind of movie they mean, nowhere near as important or clever as it thinks. The concept is good – a group of medical students investigate what, if anything, lies beyond death. However, the answer seems to be “MTV”, going by the pop-promo style visuals everyone gets on their trip to the afterlife. Oh, and be nice to people, otherwise you feel really guilty about it when you die, even if they’ve moved on, completely forgotting you. Such is about the level of depth here, and the plot isn’t much better. Why carry out your experiments in a grubby, badly-lit church? Why not, say, Sutherland’s huge flat – impressive for a med student! Maybe because everywhere, even the teaching hospital, is lit with two candles and a MagLite. I guess electricity must be expensive in Chicago.

That’s a shame, since the talent on view is great. Schumacher snagged Roberts before Pretty Woman came out, and most of the cast have gone onto bigger things (save William Baldwin, but hey, an 80% hit rate shows a good eye). Their bickering and fear come across beautifully, despite too much footage of the actual experiments – we get it the first time, not the fifth. Still, they seem a nice bunch of kids, and you do care what happens to them, despite Schumacher’s best efforts to drown them in lush cinematography. In the absence of anything higher, I guess the moral is: if you must video-tape your one-night stands, don’t leave them around for your fiancee to find, all conveniently labelled.