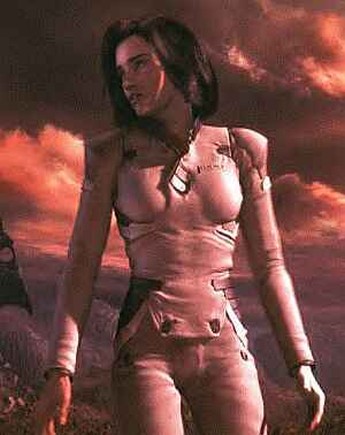 Can’t argue this is about the most visually-stunning movie you’ll see all year, and is certainly the closest yet to entirely artificial actors (Keanu Reeves excepted). Yet, it doesn’t quite work, perhaps because you seem intended to marvel more at the heroine’s hair than the character relationships. It’s a little New Agey for my tastes, with Earth threatened by alien phantoms and the military, led by uber-sarcastic Woods, threatening all-out war, over the kinder, gentler heads of Wen and Sutherland, assisted by tough marine type Baldwin.

The design work is outstanding, from spacecraft, through multiple backdrops, to the aliens themselves, who rip the souls out of their victims, and I also loved the soundtrack, which borders on the classical – rare and brave in today’s CD-promotional world. Not all the characters fit their voices – it seems very odd to see Steve Buscemi’s voice coming out of something well-muscled – and Chris reckons the hands were dodgy too. Didn’t notice that, yet there was just an element needed, something to really make you care. While you could often forget you were watching animation, you could never forget you were watching a movie.