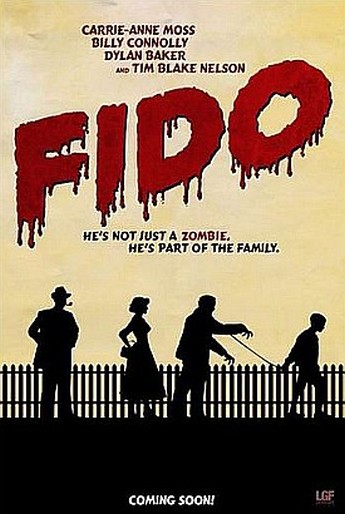 Certainly an appealing premise, the movie is set in 1950’s small-town America after a zombie war has been won, and the undead – thanks to the efforts of the ZomCon corporation – have been tamed and turned into menial servants. Timmy (Ray) loves his family’s zombie, Fido (Connolly, basically unrecognizable), acquired by his mother (Moss) in an effort to keep up with the other residents on the street. His father (Baker) is much less certain about the new arrival, having had to shoot his own father in the head during the war. However, Fido’s collar, the only thing that keeps him from returning to his life a flesh-eating ghoul, malfunctions and he chows down on the family’s irritating next-door neighbour. Can Timmy conceal the crime, deal with the local bullies and save Fido from being recalled by ZomCon?

The evocation of a kindler, gentler era as in shows like Leave It to Beaver is picture-perfect, with the music, costumes and dialogue combining beautifully, right from the opening ‘educational’ film that fills in the back-story with admirable efficiency. However, the main weakness is a storyline that feels over-stretched: this would have made a brilliant short, yet feels somewhat thin when stretched to feature-length. It’s basically a one-joke movie, inspired by the last scene in Shaun of the Dead, and while amusing, I found myself usually a couple of steps ahead of the plot. While the performances are nice enough to keep thing ticking, there’s not enough meat on the bones, and I was left hungry to learn more about a world at peace with zombies, outside of the small-town depicted here.