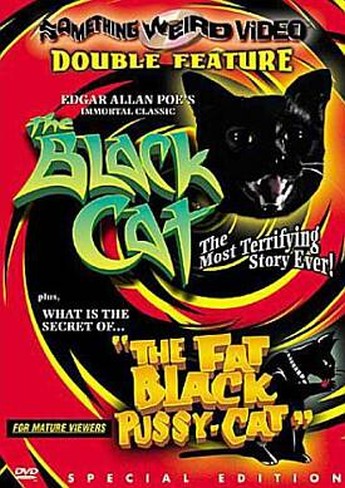 This week’s offering from Something Weird Video (or perhaps it just seems that way) is a double-bill of cat-cinema. First, a retelling of the classic Edgar Allen Poe story, The Black Cat. Then, a harmless murder mystery gets converted through the magic of editing and extra footage into a lurid piece of nonsense about telepathic felines, with the “help” (quotes used advisedly) of producer/distributor M.A. Ripps. The Poe is a relatively faithful adaptation: man gets cat, man hates cat, man kills wife, man bricks corpse of dead wife up in cellar, etc. Of course, being faithful is a chore when the source for your feature is less than 4,000 words long, so they add a lengthy descent into madness for the central character, a writer named Lou. On the whole, they shouldn’t have bothered.

Fat Black is more fun, albeit in the way road accidents are fun. Something Weird have the deleted footage as an extra feature, so you could conceivably reconstruct the original, before Ripps tore into it, adding murders, removing nudity and creating a whole new ending using look-(not-very)-alikes for the two leads. It’s a bit of a shame, since while the original was hardly a classic, it had a dry self-effacing humour, and poked fun at the beatnik culture in a surprisingly easy to watch way. The new footage, in comparison, is often tedious and can’t honestly be said to be an improvement. The lesson here? Probably that some things are best left alone.