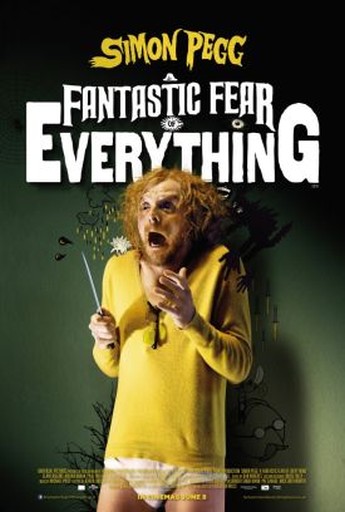 Not your typical Pegg comedic fare, this is rather darker and also, all over the place, with everything from dream sequences through paranoid delusions, to a lengthy stop-motion animation tale, concerning a psychotic hedgehog’s relationship with his brother. At its heart is Jack (Pegg), an unwilling children’s author whose mind has been turned badly sour by his current project, concerning Victorian serial killers. He is now scared of…well, as the title suggests. His agent (Higgins) gets him an interview with a Hollywood executive visiting London, but a series of events find Jack in the local laundrette, with a carving knife superglued to his hand, making a very poor impression on the locals. Then, things really start to spiral out of control.

Mills is a former rock star, and it kinda shows in the way this has the attention span of a three-minute pop-song. Put it this way: where you end up is nowhere near where I was expecting from the start, though our interest was largely the result of Pegg’s presence (we’ve watched him in some real dreck; even we balked at Run Fatboy Run). It certainly doesn’t all work, and at more than one point, I found myself bewildered at what a complete mess the whole thing is, in many aspects. On the other hand, there’s a strong visual sense here, with Hackney transformed into a menacing landscape, where danger lurks around every turn [okay, not much of a transformation, really]. But perhaps the strongest factor is that you simply never know what’s going to happen next. When it seems cinema is becoming increasingly bland and predictable, I’d rather see an interesting failure like this, than a dull success.