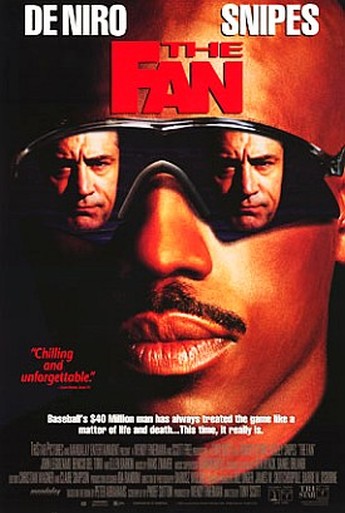 I think it’s rare for a film about baseball to have such a wildly-inaccurate grasp of the game; however, right up until the finale which appears to be aiming to redefine “ludicrous”, I enjoyed watching DeNiro’s turn as a San Francisco Giants fan, who becomes increasingly unhinged as his life falls apart. His career goes down the tubes, his wife takes out a restraining order, and his favorite player, superstar outfielder Bobby Rayburn (Snipes), stops hitting. Gil blames another Giant for not letting Rayburn take his jersey number and decides to “help”. However, Rayburn is oblivious to the assistance, and so Gil decides on a more direct method to get the thanks he feels he deserves. This involves kidnapping Rayburn’s son and… No, you have to see this to believe it. And even then, you still won’t believe it.

Few people are as good at playing a psychopath as DeNiro. Think Taxi Driver, Cape Fear or whatever: similarly here, his mannerisms and tics leave the audience in no doubt. Gil is a loony. That’s really where the fun is to be had, not least because I also hate the Giants, probably more than any other team save the Yankees – any movie that portrays their supporters and, indeed, their players in such a negative light, can only be applauded, loudly and at length. [I’m astonished baseball authorities ever gave their blessing to this work, as they must have done for the use of team names, etc.] It basically does for baseball, what Basic Instinct did for literature, albeit without quite the same sense of style – or lesbians. Outside of DeNiro, there is much to mock and little to applaud, but I’d be lying if I said I wasn’t entertained.