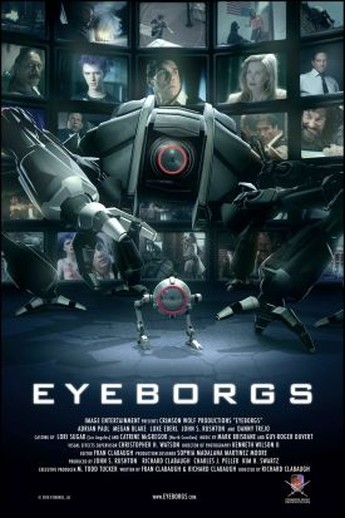 For almost ninety minutes, this manages to weave a nicely-paranoid tale: sure, it’s nothing new, combining chunks from Robocop with Enemy of the State and other conspiratorial works, yet it keeps just on this site of tin-foil hat territory. Unfortunately, the finale goes right off the edge, yelling “Geronimo!” as it goes, ruining what had, to that point, been a respectable slice of straight-to-video SF. A little in the future, our society has become an increasingly surveillant state, with the titular critters keeping an eye on us. And it’s not just for evidence, they are also authorized to take direct action if there isn’t a law officer around. An apparent lunatic tries to kill the President’s nephew (Eberl), yelling that the President must be stopped, but the more that police detective Gunner Reynolds (Paul) investigates, the more things begin to unravel, with the evidence the eyeborgs produce contradicting what he sees. With the aid of a nosy reporter (Blake), an an election looming, he digs into the apparent scheme to enhance the eyeborgs’ role, and uncover who’s behind it.

Paul does a decent job as the dogged detective, and the CGI robots mesh nicely with the action, the eyeborgs occasionally even showing little flashes of character that are quite endearing. It’s a nicely-constructed future too, much of it seeming like a natural progression of current events, e.g. tobacco is now entirely outlawed, occupying the same position as weed currently. If you’re of a conspiratorial bent, there’s plenty to have you nodding in recognition here, the government setting up ‘false flag’ attacks, in order to invade foreign nations for their resources. Hmmm, that’d never happen, would it? Things escalate nicely, until it appears Reynolds will get to the bottom of things at a campaign debate, when… Oh, dear. The wheels appear to have fallen off the plot, because there’s little attempt at a resolution, and what there is, is painfully feeble. I mean, the boss eyeborgs now growl? Really? By the end, you’ll have a list of unanswered questions – as well as an equally long list of ways they could have finished, that made more sense. It almost feels like a different writer took over for the last reel, and that’s a shame, as up until then, this had the potential