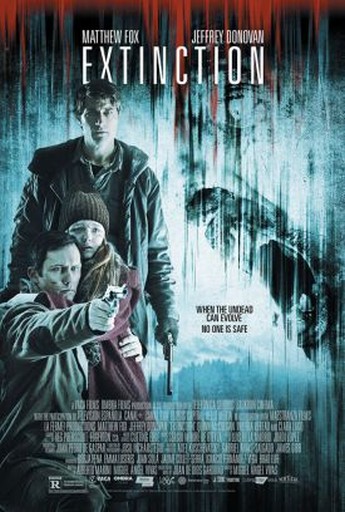 Or, if you prefer, 30 Days of Zombie Night. For we join a zombie apocalypse in progress, as Jack (Donovan), Patrick (Fox) and others are heading for an army base that should provide sanctuary. An attack stops them; nine years later, we find Jack and Patrick, along with Lu (McColgan), a girl who was a baby at the time of the attack, living next door to each other in the small, Arctic town of Harmony. It appears the virus and the creatures it has spawned have died out in the intervening time, but better safe than sorry, eh? However, for reasons initially unclear, Jack and Patrick are now at each other’s throats, and it appears the biggest threat to their survival could end up being each other. Until, that is, Lu claims to have seen a “monster” in the middle of the night. Jack initially writes this off as a nightmare; after Patrick encounters it, that’s no longer a tenable position. It becomes clear that the cold hasn’t killed off the things, so much as made them harder, faster and stronger.

Which is where the film falls apart. Instead of accelerating towards an unstoppable climax, the second half largely turns into a great deal of skulking behind barricades; for obvious reasons, that is nowhere near as interesting. There seems to be a recent trend of taking the zombie film out of the city where it has usually thrived, into a more rural theme, perhaps influenced by The Walking Dead. This can be effective, but it needs to be handled with more care than simply throwing a few monsters at the characters and hoping the results are interesting or exciting. Too much remains unanswered here – where exactly were the creatures for the past nine years? – and I’m no fan of films that deliberately obscure past events, especially when, as here, it’s not no real purpose. Fox and Donovan both give good performances, and Vivas does a fairly decent job of setting up the various pieces, creating a spooky atmosphere over the first half. Unfortunately, it’s one largely pissed away by the flat tedium of the battles in the remainder of the film.