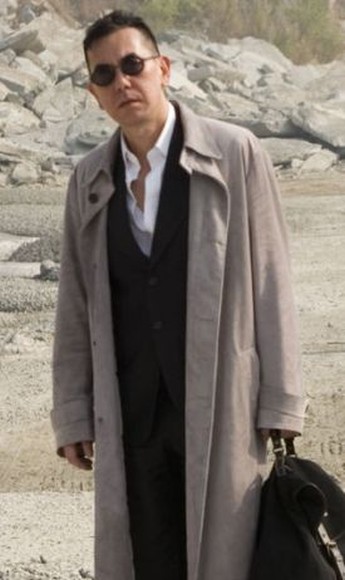 Ex-mobster Wo (Cheung) lives quietly in Macau, but the boss he tried to kill, Fay (Yam), has located him, and send his top hitman, Blaze (Wong), to kill him, even though the pair grew up together. However, on arrival, Blaze finds Wo being defended by another childhood friend, Tai (Ng); eventually, the two come to a truce, and reunite woth Wo, agreeing to work together to come up with cash that will allow their target and his wife to escape and start a new life. However, this is a Hong Kong movie, and we all know how well the whole “escaping and starting a new life” thing usually works in those i.e. not at all. Such is the case here, and it’s not long before Fay realizes that Blaze no longer has any intention of obeying orders. Equally needless to say, he’s not happy about it.

I think To may be my favourite director in terms of current output, surpassing David Cronenberg. I can’t think of a single To movie which I haven’t enjoyed, going back to the joyous comic-book action of Heroic Trio, and this is certainly not far short of that in terms of quality. It helps to have someone like Wong as the centre of the wheel: I think, in terms of pure facial expressions, Wong is up there with Klaus Kinski. There’s solid support here, from a bunch of other faces you’ll recognize if you’re a fan of HK cinema (or, odds are, just seen more than two films from there!), and To’s usual eye for stylish visuals is in full effect – I’m not sure if he, like Wong Kar-Wai, has a “regular cinematographer,” but if so, credit there as well. The film strikes the balance between drama and action particularly effectively, though the latter do tend to suffer from confusion, though are still entertaining, even if you have to wait for the smoke to clear to tell who’s left alive. Slick, entertaining and fully satisfying.