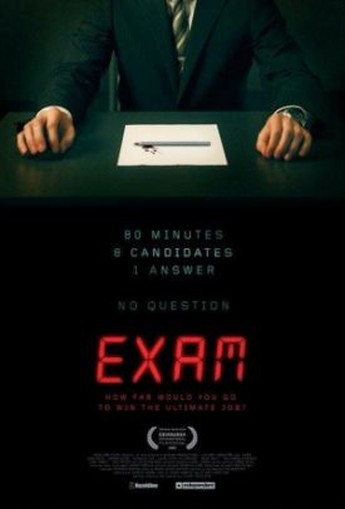 I like the “small group in a single room” genre of film, as much as I like the “time travel paradox” genre, and this ia a well-written example. Eight people are the finalists for a job at a biochemical research facility, while outside a plague appears to be ravaging mankind. The final test is a written one: they have 80 minutes to answer a single question, and the invigilator warns them that they will immediately be disqualified if they try to communicate with him or the guard, leave the room, or deface their own paper. However, when the clock starts, and they turn the sheet over, it’s blank. How do you answer a non-existent question? Almost immediately, their numbers start to be whittled down as the rules are broken, consciously or otherwise, and those who remain begin to show signs of stress resulting from the situation. As the clock gets down, it seems only one man (Mably) believes he knows the answer to the puzzle: does he, or is this just his blatant narcissism kicking in?

The problem with films like these are that, while the premises is usually fascinating, the explanation at the end never quite manages to be as compelling or convincing. How close it comes is, far and away, the biggest deciding factor in the movie’s success: it could be performed by a cast of award-winners, but if the final reveal is poorly constructed, the film will fail. Here, it’s a qualified success: what happens does make sense and is largely satisfying, but getting there requires more than a little convenient shuffling of plot and characters to reach the expected goal, and there’s one twist (the identity of a participant) which is absolutely telegraphed. However, Hazeldine – better known as a Hollywood writer and polisher of other’s scripts – acquits himself pretty well in his directorial debut, and the tensions are ratcheted up steadily, making for an interesting and appropriately claustrophobic dynamic as the participants struggle with each other for dominance. If not quite the finest of its kind, I certainly didn’t feel cheated when we put our pencils down.