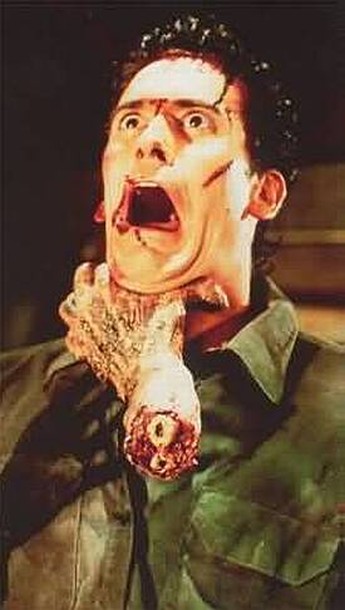 There’s a debate as to whether this is a sequel or a remake; I’m inclined toward the latter. The first seven minutes are, admittedly, a high-speed gallop through the events of the original (restaged, since Raimi couldn’t get the rights to the footage), but after that, it’s truly its own puppy. And a sick, twisted, demented critter it is too. The rawness is all but gone; this time, Raimi had a lot more money, and was also considerably more experienced, which helps things a great deal. But the two biggest improvements are a script that contains almost no slack, and Bruce Campbell, whose talent has come on in leaps and bounds – watch the two films back-to-back, and it’s particularly obvious. Given he’s basically alone (the dead and/or hallucinations excepted) for much of the first half, it’s a brilliant performance on both sides of the camera, to keep the audience enthralled as he battles his demons – internal and external.

It is a slight shame that the film chooses to divert itself to the arrival of Annie (Berry), daughter of the academic who discovered the Book of the Dead. Her journey to the cabin, and the three people who arrive with her, is significantly less interesting than Ash smashing plates on his head. However, it’s all relative, and the mayhem is soon resumed in a fashion which can only be described with one word: “Groovy!” The focus is less horror than horror-comedy, a difficult genre to get right: maybe less than half a dozen films since Evil Dead II even come close to the degree of success here. The magnificent twist in the final five minutes is both a great ending, and wonderful way to segue into the third movie.