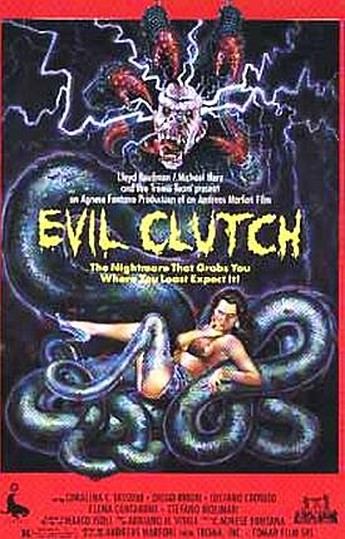 [2] Troma also buy in foreign films; this is an Italian horror pic, and guess what? It is one of the worst movies I have ever seen – I expected it to be bad, but it surpassed even my fears. The plot is totally incoherent (couple in woods, horror writer warns them of danger, they ignore him and are attacked by a ‘zombie’ whose makeup looks more like sun-burn), the cast numbers five and the director clearly got a Steadicam for Xmas; there is barely a shot without the camera swooping, swaying or disappearing up its own backside. The first five minutes promise a lot of squirms, with a guy having his genitals torn off by a woman with claws in an unusual place (presumably Miss Evil Clutch).

For the next 70-odd minutes though, there’s nothing except cliches, pointless scenes, dry ice and more bloody Steadicam shots. The end is gory enough – it’s just a shame that by then you’re so cynical that even the sight of a chainsaw does little to raise your spirits. The characters wander about aimlessly – the zombie runs on, removes the hero’s hands with a rock and runs off, and Miss Clutch disappears totally half way through the film, only to reappear at the end lying next to a bridge, for no apparent reason other than to give the director something for the camera to run towards. The biggest pile of garbage I’ve seen for years.