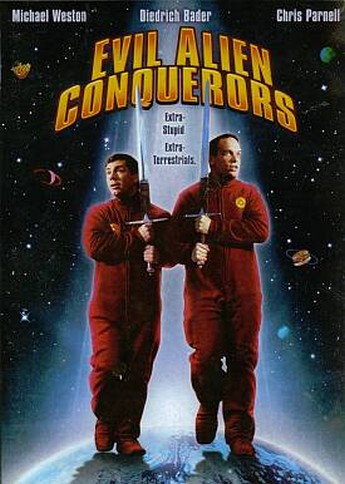 If this feels like one of those Saturday Night Live movies, where a skit is stretched to feature-length, it does just about stand the transition. Two dumb aliens (Bader + Parnell) come to Earth with a mission: decapitate all of humanity in two days, as the advance guard of an invasion. Luckily, they land in California, so fit right in, despite a tendency to threaten horrible death on anyone who crosses their path, including cows. Eventually, however, they switch sides, after discovering the delights of Earth culture, including Smirnoff Ice, which is plugged so often, it goes beyond product placement into a surreal world of its own.

It’s all about as dumb as it sounds, and there’s no doubt consumption of the aforementioned alcoholic beverage would likely help – a twelve-pack should about do it. And yet, there are moments of absurd, deadpan bizarreness that had us cracking up, such as when their nemesis (Labine), a normal-sized guy who thinks he’s 100 feet tall, gets roped into doing an exercise equipment infomercial. Such nuggets cover for a general mindset that seems to think silly voices, repetition and high-volume are intrinsically funny, which may be why I’m reminded of SNL. Repeat viewing might turn this into a cult classic, or reveal its inadequacies. While in no hurry to find out either way, I’ll admit I was entertained, and am still singing Nerfherder’s theme song.