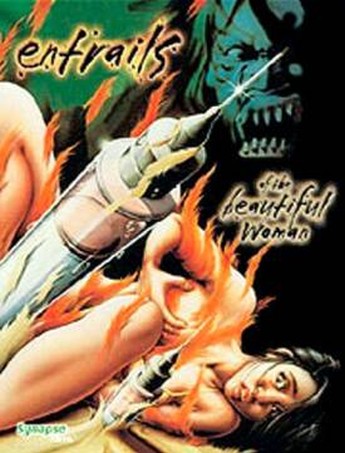 While it’s rare movies leave me at a loss for words, this pretty much did it before even beginning, thanks to Synapse’s uber-gory DVD menu. It is a bit of a cheat though, since nothing else in the film quite matches it, being mostly pretty intense, rough porn. A Yakuza gang kidnap a girl and sell her off into white slavery (or yellow slavery, perhaps?); her sister investigates but ends up leaping to her death off a rooftop, after she’s been raped and injected with ‘angel rain’, a F-strength cocaine derivative. A psychologist who witnesses this, tries to take revenge by hypnotising a gang member, only for both to meet similar fates. Then we see the true power of angel rain. Revenge, it seems, is a skinned hermaphrodite…

This kind of film could easily be described as misogynistic, with the focus being on unpleasant fates meted out to the female characters. Not that the guys exactly get off lightly, but their deaths aren’t drawn-out in quite the same way. There are certainly some creepy/effective moments, but it’s just too uneasy a blend of sex and violence to work for me; here, those ingredients don’t mix at all, and the end result feels as if another director took over proceedings for the last twenty mins. Still, this meets even the most demanding sleazehound’s weekly quota – and if you want to get rid of unwanted Christmas visitors, just wave your Entrails at them.