I never had a baby-sitter growing up: my older sister was about the nearest I got. So, the whole concept here seems strangely foreign to me, like all the movies set around high-school proms, something equally alien to the North of Scotland. An uneasy tone is set, right from the beginning, with a young woman being drugged and abducted by a couple in a car. From there, we switch to a house where a husband and wife are getting ready for a night out, leaving their three children in the care of baby-sitter Anna (Bolger), a late replacement for their unavailable regular. Given the prologue, it’s already obvious “Anna” is not who she claims, and her intentions are dubious in the extreme. After the parents leave, the mask begins to come down. While her agenda may be murky, Anna’s feeding of the house pets to each other makes it clear she’s a very loose cannon indeed. She realizes 12-year-old Jacob (Rush) is the potential threat to her goals, and her “bad babysitter” approach targets him in a way guaranteed to lead to more uncomfortable shifting. 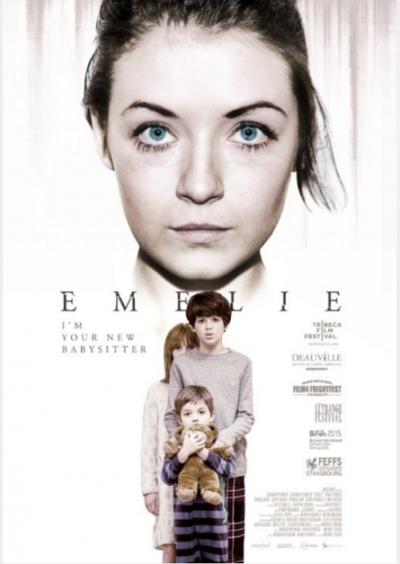 It’s this early section where the film is most effective. You don’t know what her motives are – just that they can’t be any good, and the sense of mounting dread is relentless. The movie switches from Anna’s deliberate deconstruction of the family home and its inhabitants, to Mom and Dad exchanging banal chit-chat at the restaurant, oblivious of the monster they have invited in. The urge to yell, “LEAVE DINNER NOW!” is particularly strong during these scenes. It does eventually become clear what her motive is, and… Unfortunately, it’s a bit disappointing, in part because it doesn’t tie particularly well to her previous actions. If you can’t think of any number of easier methods to achieve the same end, you’re not trying. It seems to sink back on the old “Well, they’re mad, aren’t they?” explanation, which is more an excuse than a credible motivation.

Partly as a result, the rest of the film seems to want to play more like an R-rated and entirely non-comic version of Home Alone, with Jacob trying to protect his little siblings from the predatory intentions of Anna. This is nowhere near as novel or interesting, since Rush – while by no means bad (and with an extremely tolerant set of parents, it would appear) – remains a young kid, and I’d rather watch films about adults. [I struggle to sit through even child-powered classics like The Goonies] Bolger’s character would warrant rather more exploration, with a philosophy expressed in quotes such as,“Sometimes it’s okay to destroy things for fun.” Where did she come from? How did she get that way? The relatively brief flashbacks we see are more of a teaser, than offering any fully-fledged insight into her character.