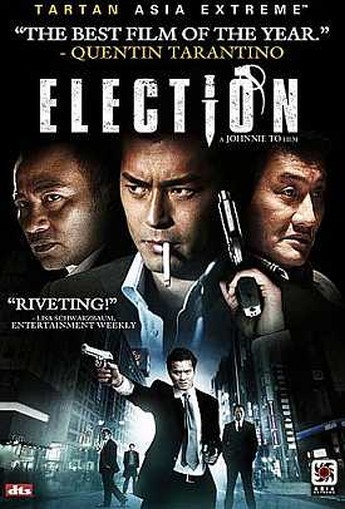 If this sounds somewhat familiar, it’s because the sequel, Triad Election, was released by Tartan in September. I can understand this reversal since the original isn’t as good, even as it covers the same theme, of how triad gangsters in Hong Kong decide their leaders. The difference here is, the focus is less on the process – a thuggish mix of bribery and intimidation – than the Dragon Head baton, the symbol of office. It should belong to new leader Lok (Yam), but a number of other players, including election loser Big D (Leung), decide to take possession of the baton, and become de facto leader. Or, as Chris turned to me two-thirds of the way through and said, “We’re watching a film about a bunch of guys chasing each other for a bit of wood?”

While harsh, it’s basically accurate, and the film doesn’t really bother to explain itself very well in this area, leaving the front two-thirds largely impenetrable to a Western audience, unaware of the cultural background in which this operates. [It won a bunch of trophies at the 25th Hong Kong Film Awards, including the holy trinity of Best Picture, Best Director and Best Actor] To avoids the obvious cliches – I don’t recall seeing a gun in the entire film – but the characters are generally little more than walking cliches. While this may be accurate, operating in a world where how you appear to be is likely as important as how you are, only Lok possesses any real depth. And that only becomes apparent late on, when the film’s potential is finally realised with a couple of truly memorable scenes, including one of the nastiest blunt-object bludgeonings I’ve seen. Otherwise, I’d recommend skipping this in favour of the sequel.