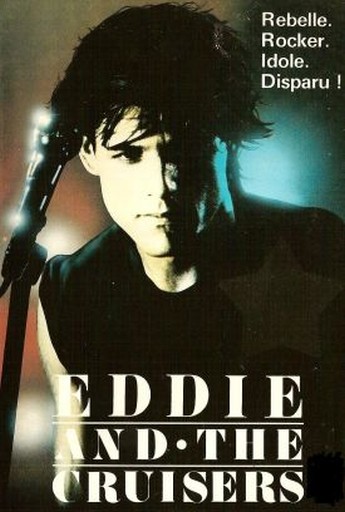 In the sixties, the titular rock ‘n’ roll band were years ahead of their time [frankly, sounding more like Bruce Springsteen than anything from the era], but only released a single album. Their second was under way when lead singer Eddie (Par&ecaute;) plunges in his car off a bridge; shortly after, the tapes of their recording sessions vanish from the studio. Two decades later, the groups receives some retro fame, and TV reporter Maggie Foley (Barkin) starts putting together a documentary on the group. She interviews lyricist Frank Ridgeway (Berenger), band manager Doc Robbins (Pantoliano) and bassist Sal Amato, who is now heading a faux-Cruisers on the lounge circuit. The background, including the tensions within the band, are gradually built-up, but it’s also clear that strange things are happening in the present day, with someone still very keen to find the tapes, and backing singer Joann Carlino convinced that Eddie is still alive, and is trying to contact her.

It’s an odd combination of retro-futurism. Eddie’s sound may have been groundbreaking for its time, but from 2012’s perspective, now sounds firmly rooted in the eighties, and there are occasions when it’s difficult to tell in which era this is operating. The ending…well, to describe it as nonsensical is likely giving it too much credit. However, Paré has the attitude of a rebellious young icon down to a tee, and you can’t really hate any rock ‘n’ roll film that refers, albeit rather too self-consciously, to Arthur Rimbaud, with the Cruisers’ second album being named A Season in Hell after one of the French poet’s works. The main problem is that the plot takes what should perhaps be the central thread – is Eddie alive or dead? – and limits it to a throwaway final shot, preferring instead to concentrate its efforts on the much less interesting or charismatic members of the Cruisers. What could have been a mythic tale of fame and oblivion, instead, it feels more like a lost opportunity.