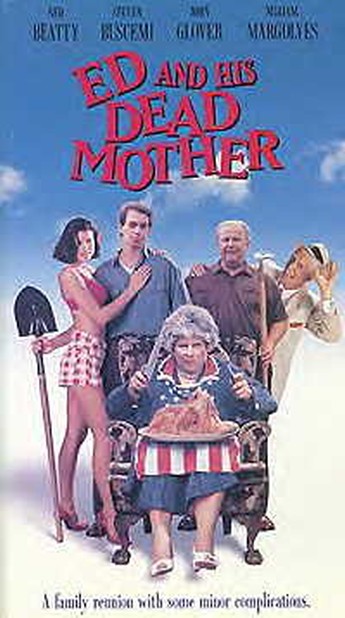 Count the plot similarities: a mummy’s boy [1] (Buscemi) sees his mother (Margoyles) come back from the grave [2], only to find her personality changed and new eating habits tending to the bizarre [3]. Meanwhile, a lecherous relative (Beatty) runs interference [4] when a sultry temptress (Jenkins) sets her sights on our hero [5] – the supporting cast also includes a priest with violent tendencies [6]. It all builds to a battle between mother and son [7] over the girl, in which a lawnmower is used as an offensive weapon [8]. Yep, Peter Jackson should sue, except Brain Dead was better in every way; if that was a roller-coaster of gore, this is a kiddy ride where the cars look like ladybirds.

Margoyles has always been a trooper, whether wrestling Arnie in End of Days or here, chasing a dog down the street while wielding a knife and fork, and the whole cast deserve better. Any original ideas go nowhere e.g. visiting relations who appear for very little reason and disappear five minutes later, although John Glover also comes out with credit as a salesman offering resurrection – another angle interesting enough to merit more exploration than it gets. Two years earlier and this would have been a fascinating precursor to Brain Dead. Instead, coming the year after, it’s no more than a lame, Disney-fied rip-off.