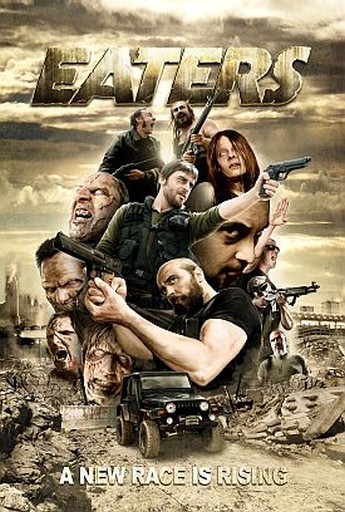 A disease has been unleashed upon mankind, first cutting the birth rate to zero, wiping out most of the female race, then turning virtually all those who remain into flesh-eating ghouls who roam the devastated world, looking for prey. Survivors are scattered and generally solitary, though some have formed groups like the New Death Militia, a neo-Nazi group which pits wannabes in death matches against zombies to decide if their worthy to join. Compared to them, the trio of Igor (Lucchesi), Alen (Favilla) and Gyno (Marmugi) seem relatively sane. Gyno is a scientist, working to try and find a cure; Igor and Alen are tasked with venturing out into the hostile world beyond the compound, to bring back some live [ok, make that “shambling”] specimens on which Gyno can experiment. However, once they hit the road, they find it might not be the walking dead – or even the neo-Nazis – that are the biggest threat. And what of the ‘Plague Spreader’, the man broadcasting over the radio his claims to have deliberately started the plague?

This is a nice combination: in part, it’s a throwback to the glory days of 80’s Italian zombies, but it is equally, if not more, influenced by the genre’s rebirth over the past few years, and the likes of Zombieland and La Horde. Igor and Alen are kinda like the Bob Hope and Bing Crosby of zombie flicks, hitting the road and exchanging wisecracks, the situation forcing them into unlikely partnership, despite their disparate personalities, which are slowly revealed, with some surprises – not the least a moment which will, I trust, result in George Michael getting a very small payment. The set-up is quick but effective, and the story which unfolds has some interesting twists and turns. There are some aspects which don’t go anywhere, such as the strange artist – referred to as Caravaggio in the dialogue, but Warhol in the subs! – with whom our duo trade for beer and food. And, while the special effects are solid, I’d have preferred a little more splatter with my kills. However, it’s not exactly PG-13 rated, and is still likely the best zombie flick to come out of Italy since Cemetery Man.