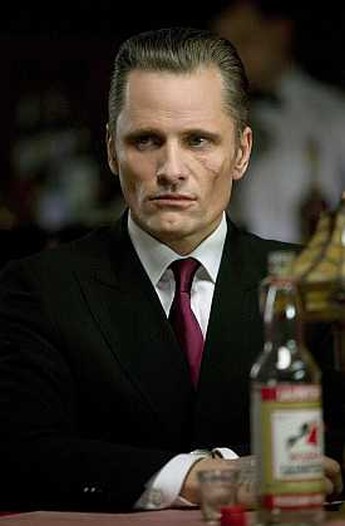 Oh, dear. How the mighty are fallen. This might be Cronenberg’s worst since… I dunno, Naked Lunch is the only one I can think of that might be more tedious, and I’ve seen every feature he’s made since Stereo, his 1969 debut. This is little more than a B-grade gangster film, with only a couple of sequences where the director’s impeccable talents get a chance to shine, notably a fight scene in a sauna where Russian gangster Nikolai (Mortensen) takes on two thugs sent to kill him, with a raw intensity which surpasses anything the rest of the film has to offer. That’s largely because of a frankly-implausible plot. Anna (Watts), a nurse, is on duty when a young Russian girl gives birth, then dies. She takes the mother’s diary and her conveniently-Russian uncle is able to translate it. Not before, however, Anna has fallen in with the gang of mobsters led by Semyon (Mueller-Stahl), who wants the incriminating document, and his two underlings, Nikolai and Kirill (Cassel).

Okay, plausibility has not perhaps been Cronenberg’s career hallmark – a man turning into a fly? – yet characters behaved sensibly, given the circumstances. Here, each twist adds another level of “I’m so sure,” and that’s if you understand Mortensen at all, mumbling his lines through an accent thicker than week-old borscht. It’s ironic, since the “Russians” here are played by an American-Dane (Mortensen), a Frenchman (Cassel, not his first time as a Soviet gangster) and a German (Mueller-Stahl); even Anna’s uncle is actually a Pole (director Jerzy Skolimowski). I mean, if you’re going for authenticity…and on that topic, can Russian gangsters not afford guns? They’re notable by their absence here. There is a somewhat Cronenbergian subtext about Nikolai’s identity, but the key moment is handled so matter of factly as to rob the revelation of its impact. The ending is about as hard to swallow as the rest, and we’re left to wonder what terrorist group kidnapped our favorite director half way through A History of Violence, and replaced him with a talentless doppelganger.