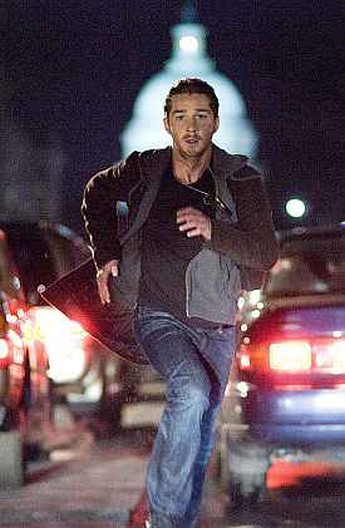 If Michael Bay had a son, on the basis of this, it would appear to be DJ Caruso, for this is crap on a large-scale. Glossy, very expensive crap, and it can certainly be admired as such – but it’s still crap, none the less, which fails to engage to the heart or mind in the slightest. Copy-center employee Jerry Shaw (LeBeouf) comes home to find his apartment full of weapons, army manuals, etc. Seconds later, he is arrested by the FBI, only to be busted out of custody by a voice on his phone, who seems omnipotent and omniscient (as well as quite probably omnivorous, but the movie doesn’t go that route). He is linked up with Rachel Holloman (Monaghan), another everyday person being ordered about by the voice, and the pair then have to follow the disembodied commands with the eventual aim of…well, they don’t know the details, but there is a hell-storm of pursuit coming after them, led by FBI agent Thornton and Air Force officer Dawson. Can Jerry and Rachel find out what’s going on and escape their apparently inevitable fate?

If HAL from 2001 got a makeover for the Internet age, you’d be looking at something like this, reflecting post-9/11 paranoia, albeit awash in more car-chases and explosions than conspiracy theories usually are (at least outside Hollywood). Plausability is not the film’s strong suit: let’s just say, if I were as omnipotent, omniscient, etc. as the antagonist here, I’d come up with a plan a great deal less Rube Goldbergian, packed with needless complexity where simplicity is far less likely to fail. In fact, if any of the central characters actually bothered to pause and think about what was happening, the plot would grind to a halt since, in this world, logical behaviour is a bigger threat than anything the script can create. It is certainly never dull; you won’t find yourself falling asleep at any point, with Caruso ramping up the adrenaline-fuelled set pieces relentlessly. However, if you’re looking for a movie that actually has something to say about the relentless march of technology and its possible uses to restrict our liberty, you won’t find it here. This is like a runaway steer: all brawn, and full of bull.