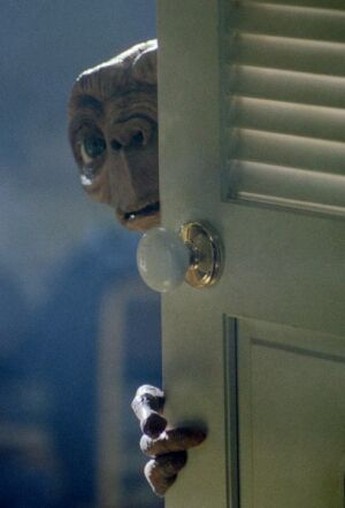 It’s been almost two decades since I last saw this; could it withstand twenty years of cynicism, not to mention the horror which is the Universal Studios ride? The answer is a qualified yes, despite a 2002 makeover which ranges from the pointless to the annoying e.g. political correct changes to dialogue, though the “penis breath” line remains strangely intact. Thanks to excellent performances from the three young leads – not least Drew Barrymore – the film captures the magic and innocent wonder of youth beautifully.

I’m still not convinced by the titular critter, who does look more like a shaved chimpanzee than an ambassador from a superior civilization. Clearly, their planet has never had coyotes, or any other predators capable of moving at faster than a slow waddle. Still, much sniffling could be heard during the “death” scene – not from me, I should add! – and I defy anyone not to smile as the bicycles take off. Some of the matte-work there does look pretty ropey, and they would have been better off giving this an update, rather than wasting their time digitally removing guns from peoples’ hands. Such quibbles aside, and ignoring some product placement which borders on the painfully obvious, this remains Spielberg’s most well-executed piece of emotional manipulation to date.