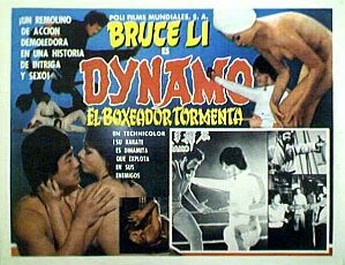 You’ve got to feel for Bruce Li. While he may lack the charisma and presence of the real Bruce, he’s no slouch as a martial artist, so it’s a shame he was stereotyped as a cheap rip-off. At least this film has footage of Lee’s funeral at the start, rather than attempting to pass a counterfeit (the yellow jump-suit from Game of Death remains painful; even Lee couldn’t make that fashion disaster look cool). Li plays a taxi-driver, plucked from his cab to be the next big thing by a film company, while a rival studio try to bring him down – though their efforts are limited to a steady stream of people for him to beat up.

There’s certainly plenty of action here, and it’s pretty good stuff, with lots of lengthy shots to show Li’s undoubted skill. It’s the rest of the film that lets everything down, by the simple process of being relentlessly sucky. A shower scene, largely consisting of the same repeated shot of the actress’ ankles. A hotel bedroom with a penthouse view, whose door opens directly into the carpark. A final tournament bout, where you never see the fighters and the (stock footage) audience in the same shot. It’s dismal stuff, and you can easily see why this kind of thing, flooding out of Hong Kong, destroyed the market. The keen-eyed can try to spot Danny Lee, who’d later gain fame in The Killer – if you find him, let me know where about, since I couldn’t!