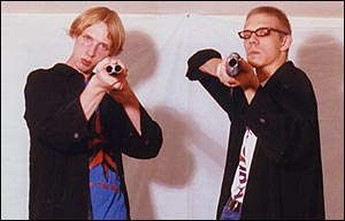 This film’s budget is so low, the directors spent more on legal fees after they got into trouble for carrying guns on school grounds – they got off with community service. And while you can pick fault with the casting (the least-convincing teachers I’ve ever seen, and as for the supposed “jocks”…) and technical aspects – the sound quality in the outdoor scenes is appalling – you can’t argue with the philosophy. It portrays the lives of geeks Derwin (Hellfire) and Derrick (Smack), and the forces that drive them to take terrible revenge on their tormentors at school.

There are side-swipes at the media and those who’d blame games, music or the Internet for murder, but these are blunt assaults on easy targets – the main benefit here is some insight, however badly drawn, into how mass slaughter becomes, not just a viable possibility but the sole one, for some psyches. It’s only by understanding this process, rather than engaging in hand-wringing and finger-pointing, that we can hope to prevent future re-occurrences. The film isn’t perhaps as shocking as it thinks it is, up until the massacre itself, which makes for gory and distinctly queasy viewing; you wonder whether it was indeed like this inside Columbine. Mind you, I’m not sure extra-terrestrials had anything to do with it, as is claimed here. Overall, this is crass and very crude. It’s also pretty damn brave.

[November 2004. Where this led, Michael Moore and Gus Van Sant followed: can a Columbine TVM be far away? Time inevitably dulls Duck‘s impact, but it’s still somewhat brave of Media Blasters to release it on DVD. The features include an interview with Hellfire, describing events after it was made, and his arrest, as well as deleted scenes and footage from the premiere at CBGB’s in New York. Less welcome are live performances by two bands who were on the soundtrack – they suck, what can I say? – but a cool extra is the “jukebox” that lets you hear every tune used in the film. All this, and a trailer for Blood Feast 2…]