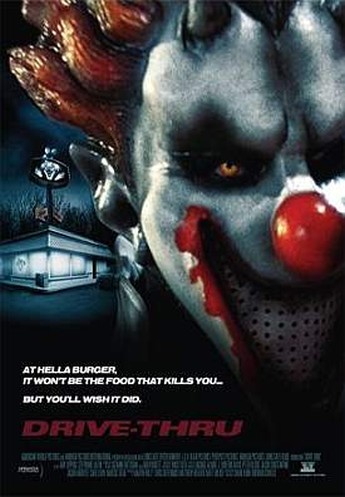 Christ, is this what passes for a horror film these days? I remember the days of the video boom, when it seemed any dire crap would get a cover with an axe on it and find its way to the shelves somehow. But I suspect even Colorbox would have turned up their nose at this, which Lions Gate – yes, the same people who buried Midnight Meat Train – deemed worth of distribution. With the minor exception of heroine McKenzie (Meeser), the characters here are as appalling a collection of stereotypes as you can imagine, and the allegedly-‘spoof’ nature isn’t a Get Out of Jail card to parade them. As a spoof, this makes the [Word] Movie series look like the output of Wilde or Coward: about the only moment of note is seeing Morgan Spurlock, the creator of Super Size Me, in a cameo as the manager of the Hella-burger fast-food store. That establishment is at the center of proceedings, since the Hella-burger mascot, Horny the Clown [oh, hold my aching sides], is running amok in the town of Blanco Carne [Shoot me. Shoot me now], killing the local teens off in grisly ways.