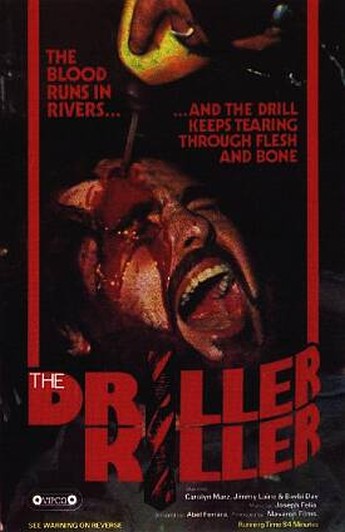 [0] Now we’re getting into the serious video nasties, with this one which is on the DPP’s magic list of 30 or so films worthy of prosecution, along with such other gems as Blood Feast. However, once again, this one has to be classed a severe disappointment to the student of splatter, with only one of the killings taking place in anything like the detailed close-up suggested by it’s reputation. It is a tale of madness. An artist working in a studio is gradually driven mad by the pressures of work and the intolerable racket resulting from living next door to an extremely poor sub-punk rock group. His agent rejects his master-work, a painting of a buffalo, and he finally starts killing various vagabonds, tramps and winos with the aid of (surprise, surprise) a power drill. The reason why he does this is never crystal clear; one possibility is that he fears them, or rather fears becoming one of them. Who can say with insanity?

Is it ‘liable to corrupt or deprave’? Frankly, no. Having sat all the way through it, I found it an immensely depressing film, with very little in the way of excitement. To some extent, it could be considered corrupting in that the murderer is the only person shown as anything else other than a bastard – we are encouraged to identify with him, certainly a lot more than the victims, who only appear for the sole purpose of being killed. As video nasties go, this is probably the nearest I’ve seen to one that can be justified artistically. Taken as a film about the descent into madness, it is certainly a worthy film, being both convincing and fairly unpleasant simultaneously, but as a piece of splatter, or even a piece of entertainment, it is very sadly lacking in anything that would make me want to watch it again.