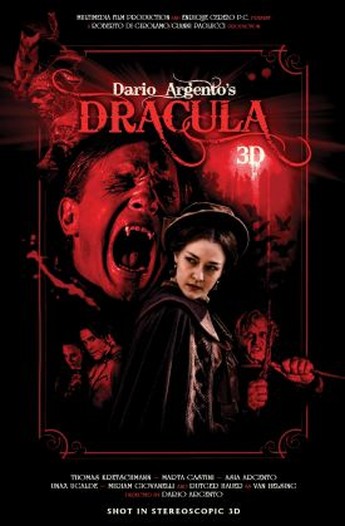 While almost universally panned, I didn’t hate this. Indeed, it was probably the most entertaining Argento film I’ve seen since… Dear god, checking the grades I’ve given, since Tenebre, and that was over thirty years ago now. This is certainly loopily insane, and not all the elements work: Exhibit A there would be Dracula turning into a giant preying mantis, for no reason ever remotely explained. However, Argento goes at the subject matter with some energy, helped by a cast who do seem well suited for their roles, and it reminded me more of a Hammer adaptation than anything. Especially if Hammer had revisited it in the 70’s, during their “boobs ‘n’ fangs” phase; yes, Asia gets her kit off in one of her daddy’s flicks. Again. Am I the only one creeped out by this?

The storyline is largely straight from Stoker, though compacted into a single location, rather that trotting around Europe [one presumes, for budgetary reason]. Jonathan Harker takes on a job with Dracula (Kretschmann), only to find himself nibbled on by the Count and his vampire bride. This draws Harker’s wife Mina (Gastini) to Dracula’s attention, since she is a dead-ringer (or undead-ringer) for the Count’s late wife. She is conveniently in town, visiting her friend Lucy (Argento), and in between seeking her husband, discovers the villagers in a state of fear, and her increasingly-pale friend suffering from what she claims is an “insect bite.” Eventually, she puts two and two together, with the aid of the village priest, and sends for Abraham Van Helsing (Hauer, who becomes one of the few to play both that character and Dracula!), who arrived bearing the necessary stakes and holy water.

I read some truly dire reviews of this, calling it a “career nadir” for Argento, but it’s far from that and certainly wasn’t nearly as bad as feared. It was shot in 3D, and occasionally, the CGI and digital effect could kindly be described as craptastic, and there is a distinct sense that a good deal of the acting is being done in a second language. However, in an era where vampires have been ripped so far from its roots, that they are now best known for sparkling and inspiring emo-ridden teenage love stories, I didn’t object to seeing a movie that goes back to the original source for inspiration.