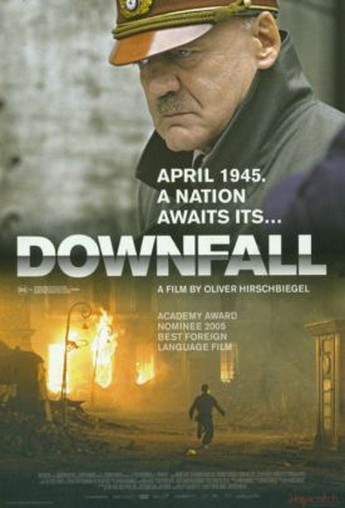 As the Russians close in on Berlin, Hitler (Ganz) hunkers down in his Chancellery bunker, still believing the Nazi armies can push back their enemies and turn the tide of the war – largely because all of his general are too scared to tell him the armies he is moving around on the map are largely surrounded or defeated. Anyone who tries to leave or make arrangements for surrender to the Allies is a traitor, who much be dealt with appropriately, including Eva Braun’s brother-in-law. But eventually, the truth cannot be hidden any longer, and even Hitler realizes that there will be no victory. While some of his closest advisers urge him to escape from Berlin while there’s still a chance, the Fuhrer refuses to leave the sinking ship, instead stating that he’ll take his own life. I trust I’m not spoiling how this ends for anyone, but that’s exactly what he and Eva do, leaving the rest of the bunker occupants to make their own decisions as to what fate will befall them.

The least interesting thing here is probably the depiction of Hitler. While I can’t fault Ganz’s performance, the doddering, deluded fool we see here doesn’t offer anything beyond pandering to the popular myth of Adolf as a deranged lunatic – while certainly true at the point in time where this takes place, it’s far from the whole picture. It was the subsidiary characters around it that are more compelling: the story is largely based on the memoirs, and seen through the eyes, of Hitler’s secretary, Traudl Junge (Lara) – who naturally, isn’t the slightest bit Nazi, dear me, no. Certainly, the most chilling sequence has Mr. and Mrs. Goebbels (Matthes and Harfouch) poisoning their own children before taking their own lives. Witness also Goebbels’ speech: “I feel no sympathy. I repeat, I feel no sympathy! The German people chose their fate. That may surprise some people. Don’t fool yourself. We didn’t force the German people. They gave us a mandate, and now their little throats are being cut!” That depicts the utter lack of humanity possessed by the Third Reich, in a much more effective way than all Hitler’s ranting ever could. However, it has not generated quite the same volume of Youtube parodies…