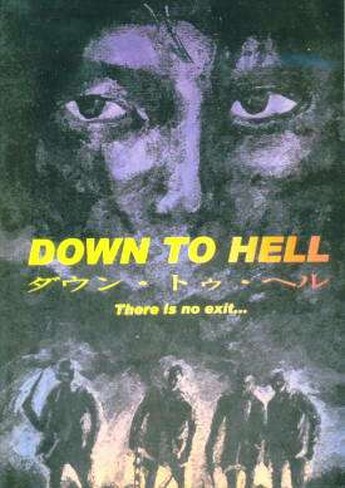 Four punks kidnap an innocent bystander, take him to a remote forest and hunt him down. Except, he won’t stay dead, is apparently possessed by some kind of evil spirit, and comes back from the grave to hunt them instead, with ever-increasing fervour. There really isn’t much more to this micro-budget Japanese movie than that, and even at barely 45 minutes, it stretches the plot elements to the limits of their endurance. And yet, there is so much left unexplained – such as why it’s this particular victim who gets resurrected – that the film manages the interesting feat of being both too long and too short.

Probably wisely, dialogue is kept to a minimum, and the combination of cheaply enthusiastic effects and Kitamura’s visual style keeps things from toppling into tedium…albeit only just. For once the basic principle here is established, there’s nothing much added; though it’s a nice concept, another angle is definitely needed, even at this limited length. The sequel would eventually morph, with the injection of cash, into Versus, which is superior in just about every way. But even in this early incarnation, you can see what Kitamura was aiming for, and detect the presence of the same ingredients used to cook up that much more satisfying dish.