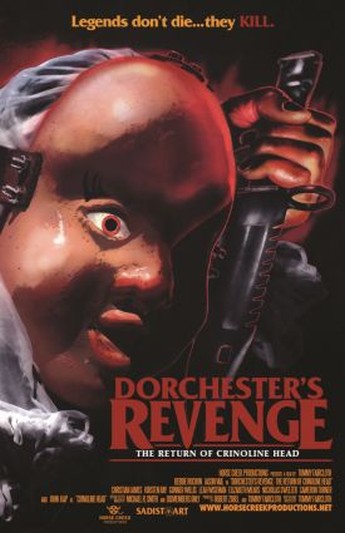 he usage of the words “revenge” and “return” will clue you in to the fact that this is a sequel, to Faircloth’s 1995 film, Crinoline Head. Don’t feel bad if you missed it. I did too – and going by the 54 IMDb votes accumulated in almost two decades, so did most of Western civilization. Wisely, the film assumes absolutely no pre-knowledge and explains that Dorchester Stewar was a child who lived in a remote cabin with his mother, who died of heart failure. By the time he was found, the boy had been reduced to cannibalizing his dead Mom to survive, then spent the rest of his youth in a lunatic asylum before escaping, leading to the horrific murders of the original as his alter ego, Crinoline Head. Now, the sole survivor, Paul Donner (Vail) is a college teacher, and when his students are told to do a project on a local urban legend, David (James) opts to take on the topic of Crinoline Head, much against Donner’s wishes, and heads off to the site of the previous incident with a few classmates. Needless to say, it’s not long before the young, attractive cast are cashing in their chips.

I’m not sure hope much this should be taken as horror, and how much as comedy. The aspects that work best are probably those when the film isn’t taking itself seriously, such as the party of drag queens, who get lost on their way to a show, and end up falling into the clutches of Dorchester. But the movie’s biggest asset is Rochon, in her role as the trashiest piece of white trash you have ever seen. She chews up not just the scenery, but her dialogue as well, along with any other actors in the scene, and then spits them back out: it’s quite wonderful, a great change from the usual femme fatales she usually plays, and it’s a genuine shame when her character exits the movie. In contrast, the bits where the film is played more or less straight aren’t anywhere as effectuve. While the kills have some nice ideas, e.g. strangled with someone else’s intestines, the execution (as it were) generally comes off as flat and uninspired.

Technically, it’s a bit of a mixed bag: the images are nice and crisp, but there seemed to be some issues with the audio, which occasionally sounded muffled in places, such as during some of the early classroom scenes. Perhaps this is something which can be tweaked during the subsequent polish? Overall, it would probably have been better if Faircloth had decided whether he was making a parody or not, and gone full-bore in the appropriate direction. What you have here comes over as wanting to have a foot in both camps, and probably ends up being weaker in each department as a result. However, Rochon’s performance alone is worth your while, and any other entertainment you might get here, will just be icing on the cake.