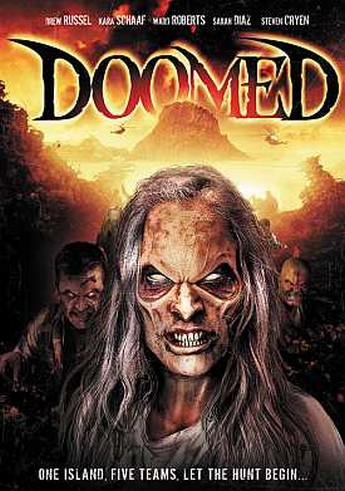 A nice concept here: while not really original, combining elements of Battle Royale, Slashers and, say, House of the Dead, it’s probably the first time I’ve ever seen a TV reality show involving zombies. Five teams, each of two long-term criminals, are dropped off on an island, and told to make their way, monitored by remote cameras, to the other side. There, a free pardon and $50m awaits. What they don’t know is that the island is home to an army of flesh-eating ghouls, the results of a failed military experiment. Not long before they find out for themselves, and they are soon scurrying for their lives, seeking the weapons dumps and safe-zones scattered about the terrain.

Unfortunately, the execution leaves a lot to be desired. The blood-count is surprisingly low, and almost entirely digital, while the TV aspects get stale fast. For example: when someone kills a zombie, the screen flashes ‘KILL POINTS: 550’. It’s amusing the first time; the thirtieth…much less so. Once you’ve seen the first twenty minutes, this doesn’t have much new to offer. That goes for the story in general, and there’s only so many times you can see the zombie attacks before they get tedious too, since there’s not nearly enough variety. It looks like the director has some martial-arts experience, which adds a welcome dash of flavor, even if it’s never explained how prisoners all become so proficient. None of the characters have depth either, and the results prove of steadily declining interest. It won’t be long before you’re wondering, what’s on the other channel?