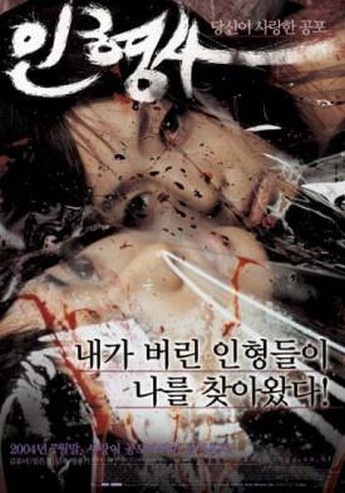 I enjoyed this. Yeah, it’s a dumb, “spam in a cabin” piece, where almost every shock is obvious well in advance. But it’s done with plenty of energy and imagination, and there’s no doubting the dolls which form the center of the film are some creepy mothers. A group of people are invited to a remote museum, to act as models for the toy-maker, a wheelchair-bound woman. But, inevitably, strange things start happening: heroine Hae-mi (Kim) investigates, but who is the mournful young girl Mina (Lim), and why does she claim to know Hae-mi? At its best, this mixes House on Haunted Hill with the “anything goes” attitude of Suspiria, and the result is a nightmarish feel that is very effective. There’s a decent amount of thought in the mythology too, with dolls joining vampires and werewolves as requiring a specific way to kill them. [Gouge out the eyes and sever the head, should you ever need to know. We believe in educating readers here at TC.]

On the down side, the genre is notorious for its share of plot-holes, and Doll is no different. At one point, a cop handcuffs someone to a wall fixture. But realising it’s a mistake, has to run off because he doesn’t have the keys to free her…giving the suspect his gun. Er, at least try and yank the fixture off the wall? Or shoot the cuffs? There’s also a somewhat confused subplot about someone chained up in the basement, which is largely unnecessary and, just like its Western brothers, you can tell who is going to die very quickly. Yet, there are times when such things don’t matter, and this film is one of them. Besides, how can you not love a movie where one character has a doll called “Damien”? If that doesn’t get those neckhairs a-boogie, nothing will. Inevitably, Dimension have bought the remake rights; only time will tell if Hollywood can capture the delirious, “one beer too many” feel of the original.